The Beginning of the End: Revisiting Methods and Shaping the Bottom of the Hourglass

Upon beginning the second half of the capstone process, attention is turned towards finishing methods and crafting a solid “bottom of the hourglass.” This includes a comparison and generalization as well as next steps for further research. Over the course of the past week, as well as over break, I’ve made progress by doing the following: making word clouds for all the survey responses I’ve gathered thus far (separate clouds for Latourell and Multnomah Falls), and researched the importance of seasonal aesthetics at Mt. Fuji, Japan. The concept of seasonality as a form of transience will be a key part of the bottom of the hourglass as I compare the impacts of seasonal change between waterfalls in the Gorge and Mt. Fuji, Japan. With regards to collection and further analysis of survey responses, I aimed to revisit both waterfalls this past weekend but got sick with a cold. I plan on revisiting the Gorge once this week and another time this weekend to finalize my collection of responses.

See below for word clouds regarding the qualitative data from my survey:

Why did you come to this waterfall? 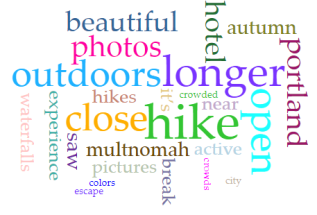 Upon examining these word clouds, it is clear that respondents came to Latourell Falls to embark on a longer hike that remains open after the fire and is close to Portland. Visitors also aimed to take “beautiful photos” and experience autumn in the gorge. It is also interesting to note how often Multnomah Falls came up as a point of comparison to Latourell Falls. Its as if Multnomah is the “gold standard” that all other waterfalls in the Gorge are compared to. This makes sense as it is the most famous. With regards to why people visited Multnomah Falls, the waterfall in particular seemed to be the main attraction, in comparison to a hike or autumnal surroundings.

What are you hoping to get out of this visit?

At Latourell Falls, visitors were hoping to experience the autumn leaves as much as, if not more than the waterfall itself. Many also expressed interest in getting an “up close” waterfall experience with beautiful views. At Multnomah, people were interested in experiencing the tallest waterfall in the state and described their desired experience in broader terms. Many respondents at Multnomah explicitly mentioned wanting to experience the “picturesque” while getting a break from the urban routine. Photography was once again a dominant theme for visitors at both waterfalls.

What expectations did you have for this place? What were they based on?

Photos clearly shaped visitor expectations at both Latourell and Multnomah Falls. Many people described the images seen as “pristine” and picturesque. Many respondents saw these pictures on instagram and google images. A fair amount of local visitors had been to both of these waterfalls before and had expectations based on previous experience.

How did your time here compare to your expectations?

Almost all respondents stated how they loved their time at Latourell Falls. The autumn foliage enhanced the visitors experiences. Low water flow was the main cause for disappointment at Latourell Falls as many of the photos people saw were of the falls at a higher flow. For many people, their visit to Multnomah “exceeded expectations” although “crowding” and “parking” surfaced as significant issues. Several visitors emphasised how the Benson “bridge” added to an “impressive” experience.

Notions of the aesthetic appeal of landscape were described by Immanuel Kant who viewed “nature as an ideal object of aesthetic experience” (Carlson, 2009).  Aesthetic appreciation of notable land forms like mountains are based on behavioral relationships between the observer and their surroundings. With regards to seasonal transience on Mt. Fuji, author Byron Earhart describes the mountain’s changing aestheticism. He states how, “During summer the bare rock above the treeline, actually solidified lava, takes on hues from sunlight and sky in shades ranging from warm red to blue or purple or almost black. When the mountain is snow covered, the light conditions and sky color may present a dazzling white triangle contrasting with a dark blue background or an off-white mass blending more subtly with a light sky” (Earhart, 2011). The changing aesthetics of Mt. Fuji through the seasons align well with the strong themes of seasonality that surfaced in my survey. I intend to conduct further research on this topic.